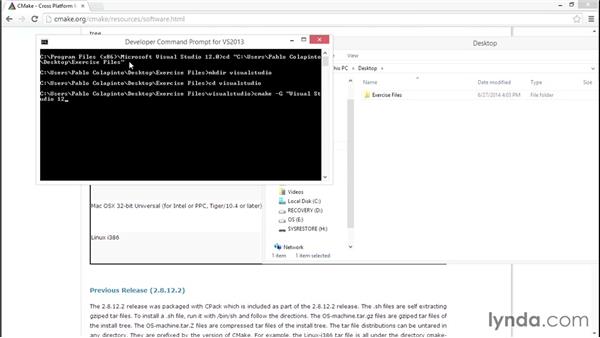 CMake is an open-source, cross-platform tool that uses compiler and platform independent configuration files to generate native build tool files specific to your compiler and platform. The CMake Tools extension integrates Visual Studio Code and CMake to make it easy to configure, build, and debug your C project. Generally, good coding practices convert to good CMake practices; you want modularity, a clear style and flexibility. An example of this might be to have rules for building your executable inside the src directory, then use that target in the root project folder. In this post, I will show you how to install your library so that it can be used easily by other projects. In particular, the system will be able to handle multiple installed versions and multiple configurations. Throughout this post, I’ll be assuming a 3.x CMake version and an already existing CMake project. CMake is a cross-platform open-source tool for defining the build process for native applications independently of compilers and environments. CMake uses scripts (called CMakeLists.txt) to generate environment specific build files, such as Visual Studio projects, XCode projects, make scripts and others. Although CMake has had support for all.

Here's the first line of every CMakeLists.txt, which is the required name ofthe file CMake looks for:

Let's mention a bit of CMake syntax. The command namecmake_minimum_required is case insensitive, so the common practiceis to use lower case. 1 The VERSION is a special keyword for thisfunction. And the value of the version follows the keyword. Like everywhere inthis book, just click on the command name to see the official documentation,and use the dropdown to switch documentation between CMake versions.

This line is special! 2 The version of CMake will also dictate the policies,which define behavior changes. So, if you set minimum_required to VERSION2.8, you'll get the wrong linking behavior on macOS, for example, even in thenewest CMake versions. If you set it to 3.3 or less, you'll get the wronghidden symbols behaviour, etc. A list of policies and versions is available atpolicies.

Starting in CMake 3.12, this supports a range, such as VERSION 3.1..3.15;this means you support as low as 3.1 but have also tested it with the newpolicy settings up to 3.15. This is much nicer on users that need the bettersettings, and due to a trick in the syntax, it's backward compatible with olderversions of CMake (though actually running CMake 3.1-3.11 will only set the 3.1version of the policies in this example, since those versions didn't treat thisspecially). New versions of policies tend to be most important for macOS andWindows users, who also usually have a very recent version of CMake.

This is what new projects should do:

If CMake version is less than 3.12, the if block will be true, and the policywill be set to the current CMake version. If CMake is 3.12 or higher, the ifblock will be false, but the new syntax in cmake_minimum_required will berespected and this will continue to work properly!

WARNING: MSVC's CMake server mode originally had abug in reading this format, so ifyou need to support non-command line Windows builds for older MSVC versions,you will want to do this instead:

If you really need to set to a low value here, you can usecmake_policy to conditionally increase the policy level or set aspecific policy. Please at least do this for your macOS users!

Now, every top-level CMake file will have the next line:

Now we see even more syntax. Strings are quoted, whitespace doesn't matter, andthe name of the project is the first argument (positional). All the keywordarguments here are optional. The version sets a bunch of variables, likeMyProject_VERSION and PROJECT_VERSION. The languages are C, CXX,Fortran, ASM, CUDA (CMake 3.8+), CSharp (3.8+), and SWIFT (CMake3.15+ experimental). C CXX is the default. In CMake 3.9, DESCRIPTION wasadded to set a project description, as well. The documentation forproject may be helpful.

You can addcommentswith the # character. CMake does have an inline syntax for comments too, butit's rarely used.

There's really nothing special about the project name. No targets are added at this point.

Although libraries are much more interesting, and we'll spend most of our timewith them, let's start with a simple executable.

There are several things to unpack here. one is both the name of the executable file generated, and the name of the CMake target created (you'll hear a lot more about targets soon, I promise). The source file list comes next, and you can list as many as you'd like. CMake is smart, and will only compile source file extensions. The headers will be, for most intents and purposes, ignored; the only reason to list them is to get them to show up in IDEs. Targets show up as folders in many IDEs. More about the general build system and targets is available at buildsystem.

Making a library is done with add_library, and is just about as simple:

You get to pick a type of library, STATIC, SHARED, or MODULE. If you leave this choice off, the value of BUILD_SHARED_LIBS will be used to pick between STATIC and SHARED.

As you'll see in the following sections, often you'll need to make a fictional target, that is, one where nothing needs to be compiled, for example, for a header-only library. That is called an INTERFACE library, and is another choice; the only difference is it cannot be followed by filenames.

You can also make an ALIAS library with an existing library, which simply gives you a new name for a target. The one benefit to this is that you can make libraries with :: in the name (which you'll see later). 3

Targets are your friend

Now we've specified a target, how do we add information about it? For example, maybe it needs an include directory:

target_include_directories adds an include directory to a target. PUBLIC doesn't mean much for an executable; for a library it lets CMake know that any targets that link to this target must also need that include directory. Other options are PRIVATE (only affect the current target, not dependencies), and INTERFACE (only needed for dependencies).

Videos For Setting Up Cmake

We can then chain targets:

target_link_libraries is probably the most useful and confusing command in CMake. It takes a target (another) and adds a dependency if a target is given. If no target of that name (one) exists, then it adds a link to a library called one on your path (hence the name of the command). Or you can give it a full path to a library. Or a linker flag. Just to add a final bit of confusion, classic CMake allowed you to skip the keyword selection of PUBLIC, etc. If this was done on a target, you'll get an error if you try to mix styles further down the chain.

Targets can have include directories, linked libraries (or linked targets), compile options, compile definitions, compile features (see the C++11 chapter), and more. As you'll see in the two including projects chapters, you can often get targets (and always make targets) to represent all the libraries you use. Even things that are not true libraries, like OpenMP, can be represented with targets. This is why Modern CMake is great! 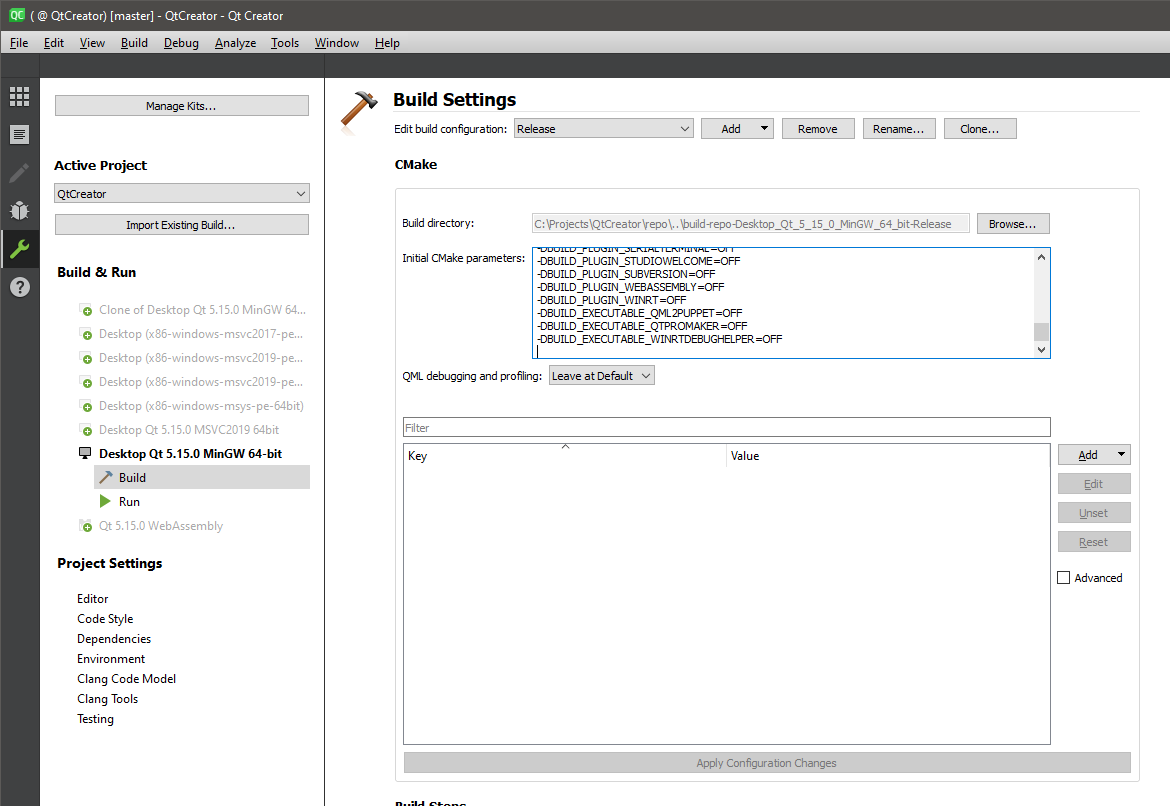 See if you can follow the following file. It makes a simple C++11 library and a program using it. No dependencies. I'll discuss more C++ standard options later, using the CMake 3.8 system for now.

1. In this book, I'll mostly avoid showing you the wrong way to do things; you can find plenty of examples of that online. I'll mention alternatives occasionally, but these are not recommended unless they are absolutely necessary; often they are just there to help you read older CMake code. ↩

More Videos For Setting Up Cmake »

2. You will sometimes see FATAL_ERROR here, that was needed to support nice failures when running this in CMake <2.6, which should not be a problem anymore. ↩

3. The :: syntax was originally intended for INTERFACE IMPORTED libraries, which were explicitly supposed to be libraries defined outside the current project. But, because of this, most of the target_* commands don't work on IMPORTED libraries, making them hard to set up yourself. So don't use the IMPORTED keyword for now, and use an ALIAS target instead; it will be fine until you start exporting targets. This limitation was fixed in CMake 3.11. ↩

It was finally time to set up API documentation for one of my projects. For reference, the project size is about 7-8K lines. Some of the requirements were:

The official Doxygen site contains plenty of information on how to use the Doxygen syntax so that to generate *.html files of documentation. This is not going to be repeated here.

To provide an outline, this is the repository structure for which I want to build the documentation:

Lets say I would like my documentation to be built inside the build-folder.

To make the Doxygen to build documentation from the CMake file, the following code snipped can be used:

If we only want the documentation to be generated in Release mode, then we can embrace the above code snippet by:

The Doxyfile.in contains the Doxygen parameters and setting for a build. At first, it is recommended to generate a default Doxyfile and then edit the necessary settings within the file.

For our compatibility with the CMake file, we have to set the input (where is the source code and other files to generate the documentation from) and the output (where the result doc files will be rendered).

Here is an example of parameters: Upgrade your mac from os x yosemite to macos sierra.

Those settings were enough to get me started with the Doxygen. As a result I now have a set of generated .html pages of my project’s API. The only thing left is to edit the code comments in correspondence with Doxygen syntax.

With codedocs.xyz, getting documentation online became even easier! All you need is to connect your github account and select which githib repository to use for documentation build. As long as you have doxygen configuration files, no further steps are required, and as a result you get online development documentation.